THE 19th EDITION OF PriMed CONTINUES IN THE ALCAZAR 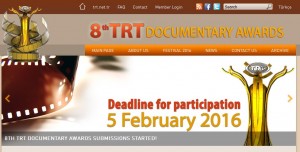 The TRT, Turkish Radio and Television Corporation, organizes the 8th edition of the festival dedicated to the documentary.
Deadline for application is 5th february 2016.

The results of the preselection will be announced on February 29th, 2016 on the site of the festival.

Permanent link to this article: https://cmca-med.org/registrations-opened-for-the-trt-documentary-awards-2016/?lang=en