Following  the cycle “documentary in the Mediterranean” , the CMCA in partnership with BMVR Alcazar of Marseille offers the screening of the documentary L’ Accademia della follia by Anush HAMZEHIAN, on Saturday, September 24th  at 17h.

This film received the MEDITERRANEAN ART, HERITAGE AND CULTURES award during 19th edition of PriMed . Admission is free within the limits of available places.

The screening is organized in the framework of the promotion of PriMe. 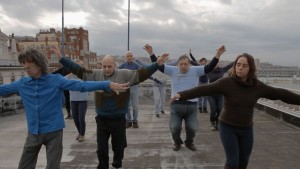 How is life for the mentally ill when they are not locked up?
To answer this question Anush Hamzehian made this film in Trieste, where mad people have lived in the community since the psychiatric hospital closed in 1978. Trieste has been called the “Hollywood of the Mad” because there is a group of world-famous actors, the Academy of Madness, which puts on two shows a year in the city’s most prestigious theatre. The actors of this unique company – Claudio Dario, Donatella, Charlie, Pino – are the unforgettable characters in this film.

CLICK HERE TO SEE AN EXTRACT OF THE FILM

Permanent link to this article: https://cmca-med.org/screening-of-the-documentary-laccademia-della-follia/?lang=en